What Is Anemia, What It Happens And How To Get Rid Of It

Introduction
According to WHO, one in four people in the world suffers from anaemia.
Last Updated
June 13, 2020

Red blood cells transport oxygen to organs and tissues entering the lungs. It is involved in metabolism, that is, helps cells to get energy from food. If oxygen is scarce, internal organs cannot work effectively: they simply do not have enough strength.

In the general blood test, anemia is noticeable

Most of all, this violation affects

What are the symptoms of anemia

The violation is not always noticed. When the lack of oxygen is small, it almost does not affect the well-being. But if the lack of red blood cells increases, the symptoms

What are the types of anemia

There are more than 400 species

This is when the number of red blood cells decreases due to bleeding - the obvious external or non-obvious internal. It may occur for the following reasons:

A lot of menstruation in women. Gastrointestinal diseases: ulcers, gastritis, hemorrhoids, cancer. Injuries or surgeries that were accompanied by blood loss. Uncontrolled use of non-steroidal anti-inflammatory drugs such as aspirin or ibuprofen. They can cause gastrointestinal bleeding, ulcers, or gastritis.

Such cases of anemia are associated with the fact that the body for some reason does not produce enough hemoglobin or this protein can not effectively "cling" oxygen and transport it to organs and tissues.

This group includes the following types.

This is the most common

In addition to iron, the production of red blood cells is impossible without vitamin B9 (folic acid) and B12. If there are few foods in your diet that contain these substances, anemia may occur. Also, vitamin deficiency leads to some medications, alcohol abuse and certain intestinal diseases.

However, sometimes the same B12 in the diet is enough, but the body simply can not assimilate it. This leads to malignant perniciosa anemia.

Various ailments, such as leukemia or myelofibrosis, disrupt blood production in the bone marrow, which makes it critically lack red blood cells. In addition, bone marrow can be damaged by radiation, chemotherapy, certain medications, or lead poisoning.

It is a hereditary disease in which red blood cells, normally rounded, take an abnormal form of a sickle. In this state, they quickly die, which leads to a permanent lack of blood-borne oxygen.

This type of anemia occurs when the body does not have enough hormones to produce red blood cells. Hormone deficiency can be caused by aging, progressive kidney disease, hypothyroidism, diabetes, rheumatoid arthritis, lupus, various types of cancer.

Anemia caused by the destruction of red blood cells

In such cases, it is said that the formed healthy red blood cells, once in the blood, for some reason begin to actively break down. This condition is called hemolytic anemia.

The destruction of red blood cells can be caused by hereditary genetic factors, autoimmune diseases (same lupus) that got into the body of a snake or spider venom, certain drugs, and so on.

What is the danger of anemia

Because of the "laziness", constant feeling of fatigue, you can stop coping with the usual activities - work responsibilities, everyday life, childcare. The forces will not remain for walks or sports, and this can further worsen your health.

In pregnant women, anemia can be one of the factors that provoke premature birth.

When the body lacks oxygen, the heart begins to pump more blood so that the organs and tissues still get enough O2 for normal metabolism. Increased stress can cause heart hypertrophy or heart failure.

Various complications up to death

Anemia can have a dozen cases, including serious chronic diseases. If you do not pay attention to anemia, you risk missing the disease that caused this condition - sometimes deadly.

How to treat anemia

It depends on its reasons. Only a qualified doctor will help to understand them, so start with a visit to the therapist.

Remember: not all types of anemia can be disposed of. In some cases, protracted and expensive treatment associated with chemotherapy, blood transfusion, bone marrow transplantation, taking drugs that suppress the immune system will be required.

But with the most common options of anemia - iron deficiency or vitamin deficiency - to cope simply. It is enough to make small changes in the diet.

The therapist will assess your condition and may prescribe you the necessary vitamins and bioadditives in the form of tablets. Or simply recommend eating healthy, varied food, including:

4 Most Common Mistakes To Ask For Help

16 Habits That Will Make You Rise in the Morning

7 household life hacks that will make your life easier 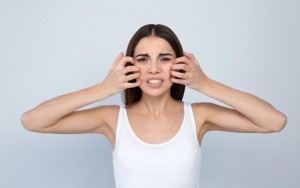 10 Unexpected Reasons Why You're Itching

9 simple but not boring poses for sex